Vaalee, the bard, the legend!

Is Rangarajan such a bland, banal name?  Does not seem so, but why a plethora of Rangarajans of the earth have hidden behind aliases in their pursuit of gaining name and fame? Is it because the ones who have not opted to do so, have only managed to turn out to be boring central bankers, listless LDCs, uninspiring under-secretaries  or the pan munching mamas of the neighbourhood?  So if one is born Rangarajan and still wishes to achieve not just professional success but ultimate crowning glory, hide under an alias. Your dreams might just take you to the summit you were yearning for!

Sujatha and Vaalee.  Two luminaries,  who added color to Tamil literature, each in his own unique way.  The former who made popular reading fashionable; brought a whiff of scientific temper to his audience, even while managing not to be straight-jacketed into a sci-fi writer.  Exhibited a vast repertoire, from Srirangam Maidens to Salavaikkari of Mexico, from Karayellam Shenbagappoo to Katradhum  Petradhum.  His sharp mind  and brilliant writing skills, not every one can aspire to be endowed with.  Not all talent can be cultivated either, some needs to be there deep inside  your DNA.  Yes, writer Sujatha had that streak of brilliance in his genes and doubtless, was a genius.  But this piece is not about him.  His mention here is only casual,  only in relation  to the Ranagarajan aliases.  He is just a passing reference…..

…..This is about the other famous Rangarajan.  The one, who bid us goodbye yesterday.  This is about Vaalee’s vivacity and versatility.  This is about his long, successful journey spanning five decades.  A sojourn which betrayed no signs of exhaustion up until  the moment the traveler fell down and never got up again.  This is about a life full of poetry, a poetry of a life.

This Vaalee was actually the Sugreev in Tamil film-lyrics kingdom.  Always reckoned as  the underdog to the original Vali i.e. Kannadasan, always lived in his shadow.     Into a kingdom ruled by Kannadasan, our (Sugreev) Vaalee initially found it difficult to step, let alone rule it  with honour and pomp. He fought with all his might but to no avail. He became depressed, dejected and decided to take exile from the kingdom of Kodambakkam.  Legend has it that PBS played ‘mayakkama kalakkama…’ penned by his very adversary, and the song shook his insides.  He returned with a vigour to the kingdom, succeeding in riveting  the world’s attention to the magic he wove  in the film karpagam and from then on there was no looking back. The veteran Vali and the just arrived Sugreev walked hand in hand and strode Tamil film world for well over three decades.

Not hundred,  not a thousand  but a staggering 10000 songs sprouted from his ever fertile literary mind.  He could write, with equal felicity, about love, death, injustice, impotence, the virtuous, the wicked, the gods, the scoundrels and a million other things.   He was the voice of MGR.  The MGR our folks saw in their lives owed half his image to Vaalee. Vaalee was the spring from which valour, chivalry, anger, compassion and love flowed through the medium of MGR to the outside world.  Vaalee was the breath in MGR’s life.  MGR dared his enemies by belting out “naan aanayittal” but the actual 'aanai' was that of the sutradar Vaalee.   The duo of MGR and Vaalee was no less potent than the other (rival) worthy duo of Kannadasan and Sivaji.  It was destined to be so.  If the KS duo was bitter sweet, the MV was hot and pungent. If KS evoked tears, MV evoked a hearty laughter.   Both the tastes were of course needed for the meal to be wholesome and delicious.  Both the emotions are needed to maintain one’s composure. 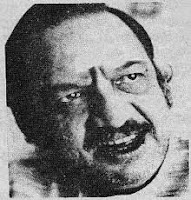 Can what Vaalee produced be termed literature?  Oh, not that question again.  Like the eternal debate between mass cinema and art cinema, between a Bach and a Barman, between a Shakespeare and a Sheldon…each cocking a snook at the other, each chest-thumping that his genre is superior…Let’s not get into all that.  Like Kamal said, there is only good cinema and bad cinema.  Like Raja said, all music which touches the soul is great music.  And Vaalee’s output was stupendous, rich and extremely soul touching.  It remains so even if the purists are reluctant to place it on a high literary pedestal.  His athai madi methayadi was as soothing as his thottal poo malarum.  His singari sarakku was as intoxicating as his maistry, kadhal sastry.  (Don’t wince. Yes, he wrote those words.  Sastry is well, mettukkudi Aryanisque,  but maistry???  Well why not, Vaalee asks.  Maistry builds the house brick by brick so does the kadhal maistry in “love build up” as Vadivelu says).

Not for him the gimmickry of knotted imagery and convoluting phrases.  Not for him the odorous  viyarvai and thorny ambugal in every other song, making the listener weary and wary, giving the feel of  travelling in a rickety share auto on a pot-holed Chennai bye-lane. His words came straight from the heart, unadulterated by literary ostentations and pretensions (and no, this is not a denigration), sliding smooth as a Volvo on an expressway with no speed breakers.   After all, those were the sixties, the golden era of Kannadasan and Vaalee.  The lyrics would be simple, gush like an unbridled stream, roar like a waterfall and caress like silk and in effect, embellish the situation and the song, not in the least fearful of being swamped and drowned in computer music.  The lyrics, the tune, the instruments, the play back singer and the actor emoting on screen, all complementing one another and leaving a lasting impact.  Such were the times!  Such was the milieu which gave space to talents like Vaalee to experiment and excel.

.....Ah, the good times have ended.  The koel has fallen  silent, the gushing waterfall has stopped.  A stunning silence has enveloped. Darkness has descended. Vaalee is gone……

PBS first, then went TMS and now Vaalee, all within a space of a few months.  The gods appear to be in a mindless, tearing  hurry to snatch away mirth, melody and music from us the earthlings. Hey foolish god, if you pluck all flowers at once what will remain of the plant?  One shudders to even think which flower of yesteryears would be the next.  Can’t death make an exception here and there, now and then?  No, death will not listen.  For death is not wont to appreciate music and the joy, music  gives to life.  Death and music are oxymoronic.

But alright.  As  one sloka says, Vaalee had anayasena maranam, vina dainyena jeevanam (a life without hardship and a death that was effortless).  He deserved such a smooth life and a smoother death.

Rest in peace, Vaalee!  People of your ilk but descend on earth, once in a century!

Posted by subramaniam mohan at 12:09 AM 4 comments: Links to this post

subramaniam mohan
Wish I could mention here something profound and ego-pampering, but will stick to the truth - nothing to brag about